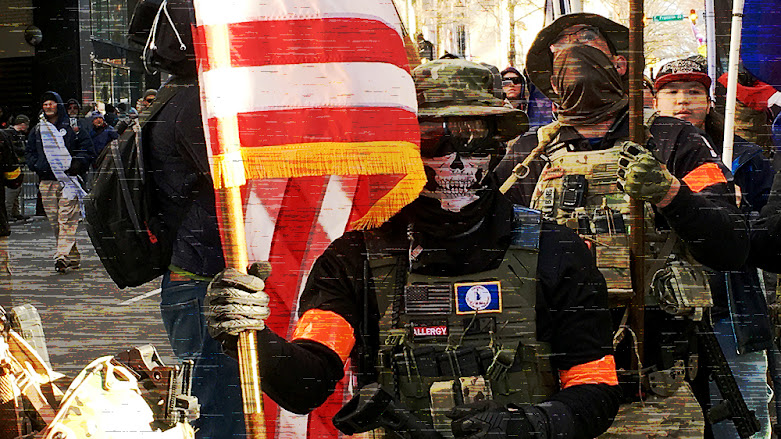 Editor's note: as I briefly mentioned at the start of this series, I've decided to engage in an ongoing series of (typically) brief discussions about modern (mostly American) fascism that center around recommended reading links and some of my own decolonization theory, for what I hope are educational purposes; today we're back with Part Four of those discussions.

In Homework Assignment 2 "But He's Not Hitler..." I explored some of the reasons why I believe Americans and many Western Europeans struggle to identify fascism and fascist ideology at home (even if they're quite eager to apply the label to those deemed from abroad somehow.) Obviously the focus of that discussion was the fact that Trump himself didn't have to be exactly like Adolph Hitler to be a fascist; indeed, the argument itself is pretty ridiculous because not even other contemporary fascists leaders in the 1930's were exactly like Hitler. Today we're going to switch gears slightly and talk about the distinct individual characteristics of fascist and reactionary ultra-nationalist movements or perhaps more specifically, where those individual characteristics come from.

First let's look at localized fascist movements inside nation states, in our case this primarily means examining American fascism. I think there is an unfortunate tendency among novice observers to get bogged down in what I've been calling "fascist scrabble" - the myriad of terms, titles and variations on the eliminationist, reactionary ultranationalism that forms the heart of all fascist movements; be they ethno-nationalist, religious nationalism or cultural nationalism. The truth however is that much of this nazi word-salad is about obfuscation and bad faith argumentation for the fascist movements that adopt this lexicon, and can thus be safely ignored by anyone who isn't devoting time and energy to an extremely granular study of violent, right wing extremist politics.

Are there minor differences among various fascist movements inside a given state? Well, yes, at least in terms of organizational structure, tactics and even ideological justification for the violent suppression of their political and racial enemies. At the end of the day however, they all believe in strict legal enforcement of unequal hierarchies, they all share an intense antipathy towards the left, or even milquetoast liberal social justice initiatives and they're all prepared to commit unimaginable violence against their societal enemies to protect their own personalized concept of the nation and the people "who matter." Whatever inter-squad disagreements the violent reactionary right may have, they are united in their loathing, hatred and desire to destroy the left such as they see it.

Why don't fascists just call themselves fascists? Frankly the historical track record of fascism suggests its adherents will probably end up bleeding to death in the mud and it's pretty hard to sell new converts on the upside of "rotting in prison for the rest of your life" or "swinging by your neck until you expire" like the boys at Nuremberg did. Furthermore, running around openly preaching eliminationism and antidemocratic rhetoric has a way of alarming voters and political opponents, although curiously (or perhaps, revealingly), aggressive nativism does not, even though it certainly should. Naturally, post-War fascist movements have solved these problems the same way their ideological ancestors solved societal reluctance to adopt open fascism; by lying and as such it's a really bad idea to take a fascist's word for it when he says he's not a fascist - they have after all, been known to bullsh*t.

Even despite all of this however, and if you step back from the minutiae of the American fascist quilt in particular, there are readily apparent differences between fascist movements across time and especially across the state borders that define "the volk" for most nationalist ideologies. As Eco touched on and a cursory examination of history demonstrates, there were significant differences (particularly in terms of organizational philosophy and animating myths) between Nazi Germany, Fascist Italy and Spain under Franco; let alone the vast differences between these movements and the Reich's allies in Imperial Japan - which despite the trappings of the Emperor, was unquestionably an entho-nationalist military cult that at least functioned exactly like fascism.

Turning towards more contemporary "fascist-movements-in-progress" we also see significant purposeful differentiation in the animating myths and rhetorical forms of modern ultranationalist reactionary movements. For example, in Brazil Jair Bolsonaro has built a fascist political machine based on exulting latent anti-Indigenous racism and a loving embrace of the country's 1964 - 1985 (fascist) military dictatorship. By contrast, Narendra Modi and the Bharatiya Janta Party (BJP) in India have achieved much the same results by embracing portions of the ongoing political legacy of its extremist (and openly fascist) ideological progenitor, Rashtriya Swayamsevak Sangh (RSS) and embracing the Hidutva ideology of a (mythical) patriarchal, sexually chaste and culturally pure Hindu nation corrupted by decadent Muslims and eventually Christians.

On the surface these two movements, and Trumpism for that matter, may seem very different (at least at times) and thus capable of defying a fair classification as "fascist." As illustrated at length in Professor Jason Stanley's recent book "How Fascism Works" however, the only functional understanding of fascism that is not vulnerable to fascist lies and fascist word salad is one that defines fascist movements as those that practice fascist politics. Still, while that insight is extremely useful for identifying "fascist-movements-in-progress" it still does little to explain why fascist movements evolve differently, in different times and places.

Naturally, some of this differentiation will be structural and dictated by the material and social conditions in nations that birth fascist movements; it would after all be extremely difficult to sell a wholly racialized Aryan-supremacist ideology fueled by a debunked antisemitic conspiracy theory in a racially diverse, largely non-white country like India. It's not just a matter of flopping the names around either; the animating powers of Nazi race science and its associated conspiracies (which are increasingly making a comeback in America and Europe) simply don't pack the same punch where preexisting nationalist sentiments and animosities revolve around religion and culture instead of purely race.

After spending much of the past five years actively studying and writing about fascism however, I think I've stumbled on two (interrelated) seemingly universal similarities shared by fascist movements that, perhaps perversely, function to make each new fascist movement at least appear unique.

First and most obviously, fascist movements invariably work to actively exploit preexisting societal divisions, prejudices and nationalist sentiments along racial, religious or cultural fault lines. The Nazis certainly didn't invent antisemitism, Social Darwinism or attitudes of militant German superiority, even if they did work extremely hard to encapsulate all of these concepts into the (still preexisting and altogether fabricated) construct of a fictional "Aryan" race. These hateful ideas were already well represented in Germany and ultimately helped serve as a vehicle to power for Adolf Hitler and the Nazi Party; just as the hateful ideas, sentiments and enthusiasms that propelled Bolsonaro and Modi to power were already deeply established before their elections in Brazil and India respectively.

Indeed after studying a wide variety of fascist movements the past few years, I've largely come to the conclusion that they don't really create anything, even ideas, so much as loot, appropriate and re-purpose them; which fits in well with the popular theory that fascism is at its root a kind of death cult.

This brings me to the second similarity, the fact that all fascists seem to borrow their myths, political ideology and conspiracy theories from preexisting reactionary movements in a given society of origin. To once again turn towards the most infamous fascists in history - the Nazi Party ideology originally formed out of the reactionary volkisch movement in Germany, grew its influence by exploiting the right wing "stabbed in the back" myth popularized after the Kaiser's defeat in World War I, and finally vaulted Hitler to absolute power primarily on the back of a decades old, thoroughly debunked antisemitic conspiracy theory originally forged by Tsarist Russians; the Protocols of the Elders of Zion.

Without belaboring the point and while recognizing that the pattern match is (as of yet) imperfect, you can easily see echoes of this same appropriation in Modi's co-option of his former party's (RSS) platform and Hidutva ideology, as well as Bolsonaro's repeated association with the Brazilian military dictatorship and comparable fascist leaders in the region, like Agusto Pinochet.

All of which brings us to a fairly obvious and important question; if Trump is a fascist and his administration is openly employing fascist politics, what are the preexisting ideologies, conspiracies and animating myths this movement is employing to sell Downmarket Mussolini's fascist agenda? To answer that question we turn to today's reading assignment, an April 2019 article in the Atlantic by Adam Serwer that explores White Nationalism, the white genocide conspiracy theory and the ideological progenitor of the hateful beliefs Trump is capitalizing on to seize total power - check it out by clicking on the link below:

Independent writer, critic and analyst with a left focus. Please help me fight corporate censorship by sharing my articles with your friends online!

You can find my work at ninaillingworth.com, Can’t You Read, Media Madness and my Patreon Blog

Inquiries and requests to speak to the manager @ASNinaWrites

Posted by The Cardboard Witch at 1:51 PM